A man walked into a pub and was approached by the bartender who asked him what he would love to have.

He answered, letting him know he would have three pints of beer.

Attending to his order, the bartender went and returned with three pints of beer, and the man received it, downing each pint alternately with the other two until they were all finished.

Once he’s done, he orders another set of three pints.

The bartender notices his weird order and gives him a piece of advice, saying,

“Sir, I know you like them cold. You don’t have to order three at a time. I can keep an eye on it and when you get low, I’ll bring you a fresh cold one.”

The man responds and explains that his tradition of ordering three pints at a time is based on a vow he made to his two brothers living in different countries.

According to him, they promised each other always to have a drink every Saturday night and added,

“Right now my brothers have three pints too, and we’re drinking together.”

The bartender thought the tradition to be a delightful one and adhered to serving the man just what he ordered.

Week by week went by, and the man came into the bar and ordered his usual number of drinks.

One week in particular he came and only ordered two drinks.

He finished them and ordered another set of two drinks.

Worried about the deviation from his tradition, the bartender approached the man and said, “I know your tradition and I just want to say I’m sorry that one of your brothers has passed.”

READ
Only 1 in 7 can get this riddle right on the first try: Figure out what’s the father’s fourth son’s name

To his surprise, the man replied, “Oh, my brothers are fine – I just quit drinking.” 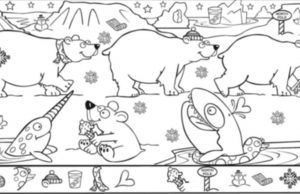 Hidden Picture: On a Snowy Day.