Wake Up Your Mind
Home Life A man walks into an antique store and buys a Siamese cat...
Share
Tweet A man walks into an antique store and looks around.

Suddenly, he is looking at the most breathtaking bronze statue of a Siamese cat.

He asks the store owner how much he wants for the statue.

The man replies, “I’m really not interested in the story, but I want the statue.”

As the man pays for the statue, the shop owner says, “All right, but I guarantee you will come back for the story.”

The man walks out of the shop and walks down the street with the statue of the cat.

When he comes to the crosswalk, he happens to glance behind him and sees 3 or 4 cats sitting about 10 feet away, looking at him.

He shrugs it off and crosses when the light changes.

He walks a few more blocks and, at another crosswalk, looks behind himself again.

This time around 30 cats sitting there looking at him. The man gets a little nervous and picks up his pace when the light changes.

When the man reached the pier at the end of the street, he has now been running for several blocks.

He was running because every time he turned around, there were more and more cats behind him.

When he got to the end of the pier, he turned around and saw at least 2,000 cats sitting there looking at him.

READ
How quickly can you spot the odd butterfly in this picture?

Panicked, he turned toward the water and heaved the statue as far as he could.

Surprisingly, all the cats passed him and jumped into the water after the statue, and never came out.

The man, still shaking from his ordeal, immediately started running back to the shop.

As he walked through the door, the shop owner saw him and said, “I told you that you’d be back for the story!”

“To heck with the story,” gasps the man, “do you have a statue of a politician??” Most people get it wrong: Can you solve this equation in... 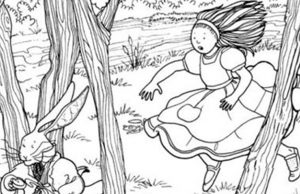 Find a Carrot in This Picture. Can You?