An Irishman has trouble finding a parking space.

“Lord,” he prays, “I can’t stand this, please open a parking space for me and I swear I’ll give up the drink and go to mass every Sunday.”

The clouds part and the sun shines on an empty space in the car park. Without hesitation, the Irishman says, “Actually never mind, I’ve found one.” 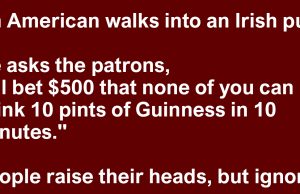 An American walks into an Irish pub Almost everybody can’t find the letter ‘C’ in under 7 seconds...