Wake Up Your Mind
Home Life A bear, a moose, a fox, a wolf, and a snail were...
Share
Tweet A bear, a moose, a fox, a wolf, and a snail were playing cards at a table.

Suddenly, the bear let out a faint roar and said, “Guys, I’m hungry. Could someone go buy some chocolate, or whatever?”

The moose shook his head and nodded towards the fox, who angrily slapped its little paw on the table and muttered, “Why me?” Why can’t the wolf do it?”

But the snail bravely interrupted the conversation before it got out of hand, “Guys, guys! There’s no reason to fight. I’ll go.”

The bear smiled a little and handed the snail a few dollars rolled up from his pockets, “Thanks, man. I really appreciate that. While you’re at it, buy something to drink, will ya?”

The snail winked, grabbed the money, and briskly started to make his way out the door. Half an hour went by… An hour… An hour and a half… Almost two hours…

At last, the bear snapped, dropped his cards to the floor, and yelled, “Hey, you know what? I think the little took the money and just left!”

A small yet fierce scream then came from near the door, “If you’re gonna start i-n.s.u.l.t.i.n.g me, I’m not leaving at all!” 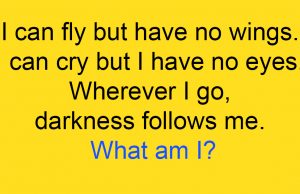 This tricky riddle makes people lose track of time – but... Mom Suspected There Was Something Going Between Her Son And His...